Where have we got to in the Smart City maturity model? 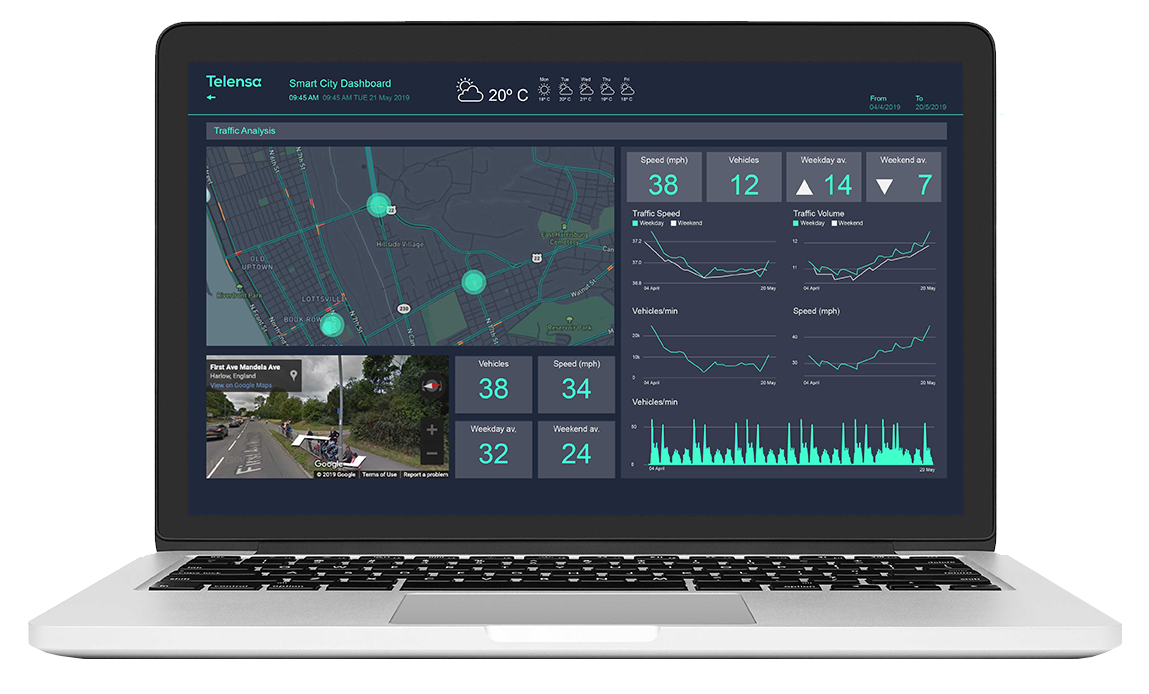 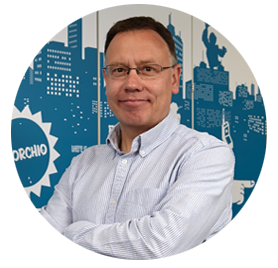 We have all got a view of what the smart city of the future looks like, with integrated multi-modal transport, predictive intervention to issues before they occur and happy citizens satisfied with the way their local authorities use their taxes.

The reality today is that we have a patchwork of solutions that address individual point solutions but do not always integrate and are not providing a platform that enables innovation to occur in service delivery.

Some effort has been put into developing capability maturity models to help authorities benchmark where they are on their journey to becoming integrated and smart. Probably the earliest widely accepted framework was presented in BSI PAS 182 and a useful description of how to use this was developed for the Scottish Government [1]. The different levels of maturity are described below.
Mirroring the way that cities are maturing, vendors are also evolving to assist in this process.

Telensa, established in 2002, was one of the early developers of smart lighting systems and we are now the global market leader in this industry, with activities in the US, LatinAmerica, APAC and Australia/NZ. We spent the first 10 years of our growth delivering smart lighting solutions usually in isolation from other systems. This was clearly a Level 1activity.

As our customers became more sophisticated in how they manage assets, we started undertaking custom integrations with asset management systems such as Mayrise. Whilst we didn’t realise it at the time, we were moving to Level 2. More recently we have been proactive at helping to drive increasing maturity to Level 3. Telensa has developed a set of open APIs to enable fast and repeatable integration with a wide variety of systems. Our recently announced partnership with Yotta [2] is an example of how these APIs are helping to deliver fully integrated systems to highways customers. Also increasingly important is cross-domain integration, and our inter-working with the National Exhibition Centre’s Building Management System [3] gives a glimpse to the future of how complete cities will become fully integrated.

So, will we simply continue this progress?

The jump to Level 4 is different. Levels 1 to 3 could occur with individual vendors or pairs of vendors collaborating. As we move to Level4, there is a need for a common platform on which groups of services from different vendors can be supported. This means a common operational system supporting asset management, workflow, project audit and IT systems. Plugging a range of services into one open system will reduce complexity, provide transparency across previously siloed systems and save costs.

Level 4 will also be used to improve how data is used across the authority. One example of the need for this is how authorities demonstrate progress in responding to their declared climate emergencies. It is easy for the highways team to demonstrate
their part in this with energy-saving data from smart street lighting,
but other departments will need to pool data to assess the effect of
policy changes. Connected systems like smart street lighting give rise to information that was previously unavailable, with usage, emissions and condition data all available in real time. Expanded
across a wider set of systems such as smart bins, air quality sensors or traffic counting, such insights into “what’s going on out there” can be very powerful. Council-wide understanding of the way services are
being provided from a single platform becomes a reality, with the ability to fine-tune on the fly. Citizen concerns about the use of personal data will always be key but the operational data arising out of the automated control of groups of assets could form part of a central resource planning tool.

No problem, we’ll just pick a platform and get on with it!

If it were that easy then authorities would already have done it. However, nobody has really presented a platform approach that has found traction in the market. We have seen a few approaches that have not achieved success:

1. Grow your Own – some authorities have developed their own
platform but have quickly become disillusioned when the
realisation sets in that these systems require quite onerous maintenance. Even worse, application vendors are not interested in integrating to the platform as it will be a one-off activity that they
can’t make money from elsewhere.

2. The Five-Year Plan – FIWARE was launched by the European
Commission over five years ago and has since eaten up a few
hundreds of million euros of taxpayers’ money. However, it has
remained the reserve of small point solutions developed by SMEs who use it as a way of attracting grant money.

3. Single Vendor Mega Systems – you see these at trade shows, usually on a 5-metre-high screen showing how everything from
streetlights to social care can be run in a central control room. For
a modest multi-million pound outlay you too can buy into this closed vendor vision and buy incremental upgrades at prices that you can trust. A risky proposition!

We believe that a new approach is emerging that is actually a replay of successful historical events.

The early ‘80s was the time of the BBC Micro, Commodore PET, TRS- 80 and Atari. None of these became dominant but what we saw instead was a focus on a common operating system and platform on which any company could build solutions. The IBM PC and MS-DOS (later Windows) showed how big companies can seed the market with a platform but deliver it in a way that enables ecosystems to grow.

History repeated itself in the 2000s. In the mobile phone space we had tightly controlled application platforms such as Qualcomm BREW, Symbian and Vodafone Live. It was only when Apple, with the iPhone, and Google, with Android, created more open operating systems that the smartphone market suddenly took off. Telensa has been working with Microsoft for over two years to adopt their Azure IOT technology which we believe will be the catalyst for smart cities to break out of point solutions and start to fulfil the promises of open platforms as described by Level 4 maturity.

Rather than try to control an ecosystem, Microsoft is providing open
technology that is creating opportunities for smart city vendors. Like other cloud vendors, their highest growth market is service provision rather than software sales, so it is clearly in their interest to develop solutions that make the overall market expand. That is what they are doing and as the cloud provider with the largest public sector focus it seems clear that they will be one of the key players going forward.
In many ways this approach is a “city operating system”, which is an expression that has been used several times before. However, previous attempts at this have been single vendor products trying to deliver a complete solution rather than act as a proper operating system should, running seamlessly in the background as an enabler. 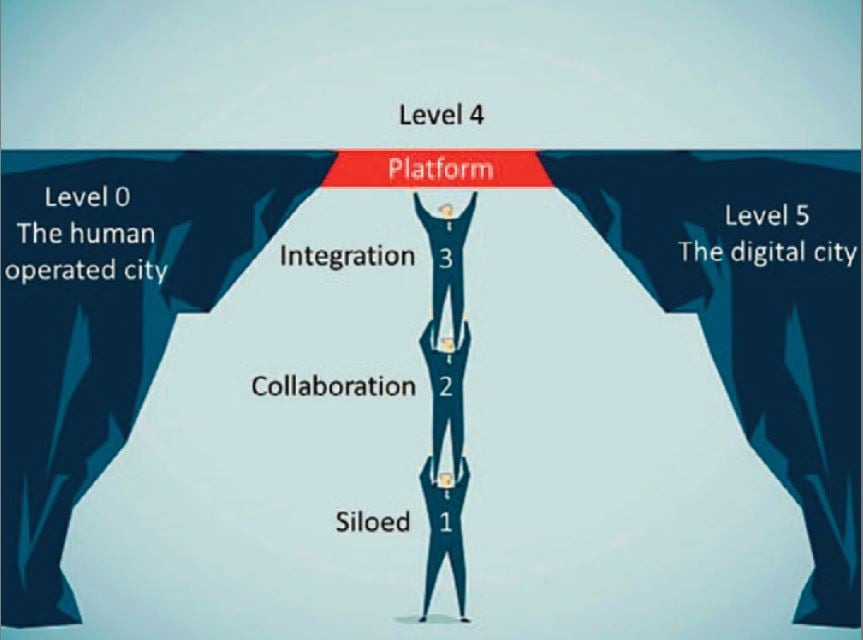 My computer’s OS has hard disc drives and display drivers, but what does a city OS have?

An OS is simply the platform on which to run applications, which in the case of local government or municipalities would be systems controlling traffic management, social service portals, streetlights and the like. Some of the elements of a common operating system that fit beneath these are shown in the table below.

Capable of integrating these services, Telensa has developed a
Level 4 enabler, a system that we call “Urban IQ”. Initially this acts as a visualisation portal for multiple sensors as shown in the image at the top right of this page. Whilst Telensa has assembled a portfolio of partner companies bringing best-in-class solutions in several
areas as shown, the key point is that the OS is fully interoperable and
open to all vendors. This prevents vendor lock-in. At the top level it is
possible to view summary information, set alerts and track KPIs. It is
then possible to click-through to see more detailed information in each domain as shown below.

Urban IQ is a seed to help authorities start their journey towards Level 4. We are working with several of our existing customers to take this simple dashboard view and add applications that bring key financial and social benefits.

Our wish is to see additional sensor vendors and application providers join us on this common platform in a way that gives authorities the ability to pick solutions from a range of suppliers rather than getting locked into a single platform. To reinforce this. Telensa can provide Urban IQ as a seed for authorities to take and run with themselves, requiring no ongoing tie back to us. Of course, we would like to continue a partnership and our goal is to bring as much real value to our customers as possible but within a truly competitive environment.

What can we expect from Level 5?

Level 4 is a stepping stone. Our level 4 enabler provides a robust, flexible and scalable platform that can be used to create transparency across a range of asset-based council services. Using the platform, council staff can move seamlessly between services to understand how they are performing and how they can be optimised.

Moving forward to the future, we are augmenting the system to be a virtual representation or “digital twin” of the physical environment which will be used to model and simulate different operational approaches across the council.

This digital twin approach is gaining momentum whereas in the past is has been the preserve of niche applications. For example, Rolls Royce [4] uses digital twins of its aircraft engines to design new components and train maintenance staff without the need to use real engines and undertake predictive maintenance.

As council systems get connected and interconnected, it becomes
possible to simulate and model them virtually for fine-tuning and improving their performance. It becomes possible to model each streetlight, each drain, each highway, all traffic, each business. Imagine what we could do as these become more integrated:

It is not the role of a single company to control this new approach to managing the physical environment. Instead, it is up to all of us to help guide new developments into a common framework that moves us on from the fragmented systems of the past. One key technology being developed is the new Digital Twin Description Language which is an open standard for describing and interacting with physical objects. It is key that this remains open and is adopted by as many parties as possible. Rather than simply being a tool, a fully integrated digital environment enables authorities to make their citizens’ lives much richer and more efficient than in the past.

What about the network?

As a radio network vendor, you might expect Telensa to evangelise about the benefits of our system. However, we believe that in a similar way to 5G cellular, the future of smart cities is about providing a platform that integrates all of the relevant technologies. Telensa’s Ultra Narrow Band (UNB) technology will be a key part of future cities for many applications but will sit alongside other technologies that are optimised for new applications as they arise.

Some vendors believe that today’s radio technology can solve all problems, whereas the approach we are taking with Urban IQ is more analogous to the platform, multi-standard approach taken with 5G. Urban IQ already integrates UNB with cellular, Wifi, Bluetooth and other standards. In many ways the evolution of smart
cities is like the Internet as it grew: rather than remaining a tool, it became an integral part of our lives.

Maybe most exciting is the unknown. We cannot predict what new services and ways of working these new paradigms will bring, but it is clear that the early adopters will be those that generate the pockets of innovation which bring their local communities the biggest benefits, so we really encourage people to take the time to understand these new technologies. If you are keen to help drive some of this innovation, Telensa would love to hear from you.